China’s moon rover ‘Chang E-4’ sent to gather information on the unknown parts of the Moon will detect the temperature of the station at the time of the living on the moon during the night. The scientists gave this information on Sunday. The moon mission ‘Chang’ai-4’ is named after the moon goddess according to Chinese mythology. The ship had landed on January 3 on the last part of the moon that was never seen from the earth. It is by far the first vehicle to land on the untouched part of the Moon.

The successful launch of Chang E-4 is considered to be a long jump in China towards astronomical observation and has given considerable strength to its ambitions towards becoming a space superpower. Since the orbiting cycle of the Moon and the rotation cycle is the same, therefore only one side of the moon is visible from the earth, and most of its side cannot be seen. The dark side of the moon that is not visible from the Earth is called “dark side.” That is, it is called “dark side,” due to not being dark but because of its unknown and untouched.

One day on the moon is equal to 14 days of earth and the same length as night. There is a tremendous difference in the day and night temperature on the moon. Scientists estimate that during the day, the maximum temperature can be around 127 degree Celsius while the night temperature may reach below zero to 183 degrees Celsius. According to China’s official news agency ‘Xinhua,’ China had launched the Chang E-3 in 2013. Even after over 60 lunar nights in the last five years, its scientific equipment is still working properly on its lenders.

“This is a success, but Chang E-3 was designed according to the temperature figure,” Zhang Hei, executive director of the Chang E-4 Exploration Project from the China Academy of Space Technology (CAST), told Xinhua. ‘ 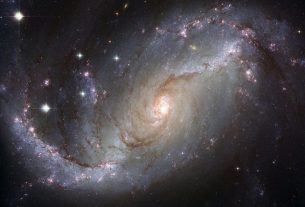 A strange galaxy is inexplicably approaching the Milky Way